George Goodhue was 6 years old when his father murdered his mother in front of him in the family kitchen.

Afterward, Goodhue’s father hauled him to the car and drove to the banks of the Detroit River, about 24 miles from their home in Farmington Hills, Michigan. There, he disassembled the gun and threw it into the churn.

“It was utter mind-blowing chaos,” Goodhue, now 48, said. “Watching someone you love literally just dissipate in front of you.”

It was just the beginning of a childhood that would only grow more traumatic. After his father was sent to prison, Goodhue’s paternal aunt and uncle became his legal guardians.

Unfortunately, violence ran in the family.

“The mornings weren’t so bad because she’d walk me to the package store where she’d get her two 40s,” he said, referring to his aunt’s libation of choice: two 40-oz bottles of Black Label whisky. “And then by noon, she was drunk and beating me and burning me with cigarettes.”

The constant threat of punishment kept Goodhue in line (although good behavior didn’t prevent the abuse entirely). He recalled asking his aunt for a Hostess fruit pie. She smashed the treat in his face.

“She always said to me, ‘Georgie, don’t cry for me when I die,’” he quoted. “‘Because I’m going to a better place, and you’re going to be stuck in this shithole.’”

After his 18th birthday, Goodhue declared himself independent, took his slight inheritance, and enrolled in college — amazingly, with no major self-destructive patterns or chemical dependencies.

Those would come later.

“For many of us, CrossFit has been a match struck in the dark.”

On March 22, 1998 — three years after marrying the college girlfriend who’d borne his first two children — Goodhue drove his wife, in labor with their third child, to the hospital. The baby kicked the whole way, but by the time they got to the delivery room, her heartbeat was gone. They named the stillborn girl Georgiana.

“I still remember having to dress my daughter at the funeral home,” Goodhue said.

For the rest of the year, Goodhue teetered on the “brink of suicide,” he said. And even though the couple went on to have two more children — a pair of sons — their marriage was volatile and unhappy. 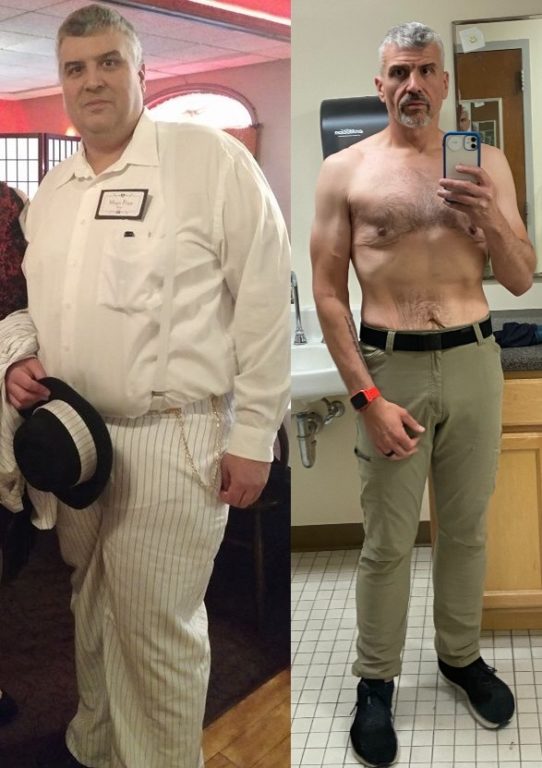 George Goodhue before and after changing his life with CrossFit.

So Goodhue did what he could to numb the pain: He smoked weed. He drank. And he ate.

When he wasn’t working his low-wage retail job, he was parked in front of the computer, programming or gaming. A shot of tequila plus a Corona — times three — was his typical starter. The vegetable drawer of his fridge was filled with beer.

Food-wise, Goodhue lived off processed and fast food. Boxed mac and cheese; Big Macs with two chicken sandwiches and a large fry on the side.

“I literally ate so much McDonald’s that I filled the back seat of my Neon up about four times to the window,” he said.

He knew he wasn’t healthy.

At 6 feet and 365 lb, Goodhue had trouble sleeping at night. The excess weight strained his back, and “just getting up and moving around was excruciatingly painful, I had such huge cankles.”

“I ain’t gonna take meds, because then I can’t drink,” Goodhue thought to himself. It didn’t matter that without them, he’d only get worse.

Goodhue had just polished off half a dozen orange-flavored doughnuts and a tall glass of milk — his customary afternoon snack — when he felt a sharp, excruciating pain in his abdomen.

“It felt like something was ripping in and pulling my spine out from the front,” he recalled.

An ambulance took him to Rutland Regional Medical Center in Rutland City, Vermont, where doctors determined he was suffering from a gallbladder attack — in which a large gallstone blocks the duct between the gallbladder and the stomach — and would need emergency surgery to remove the organ entirely.

The two days Goodhue spent in the hospital post-op — two days in which he couldn’t drink or get high — cleared the haze he’d spent the last two decades in. He thought of his four living sons, nearly grown by then, and realized he wanted to live for them.

“Not only does CrossFit make people fit, but you can make a strong argument that we make them fitter faster and more safely than any other program out there. Our results are universal, predictable, and repeatable. Our methodology works for everyone, can be scaled for anyone, and the results accrue over the long term.”

Two months after the surgery, Goodhue filed for divorce and started over in a tiny studio apartment with a hot plate for a kitchen. His main goal: lose the weight.

But there was a problem: What began as a life-saving measure had become an obsession. A replacement addiction for the ones he’d given up.

He restricted his caloric intake, sometimes eating just a hair more than 1,000 calories per day. He’d “dry fast” — no food or water — for three days at a time. He wore a sweat vest while exercising to siphon off even more water weight. And when the hospital where he now worked in information technology installed a fleet of stationary bikes and scales on-site in the name of corporate wellness, Goodhue began weighing himself as much as seven times per day.

“I literally would eat something and run to the scale and weigh myself, and be like, ‘I’ve gained 0.8 (pounds),’” he recalled, “‘so I gotta stop eating for today in order to lose weight.’”

In the summer of 2020, Goodhue’s new girlfriend, Jori — a former law-enforcement officer and weightlifting and outdoor-activities enthusiast — floated an idea by Goodhue. A friend of a friend owned a CrossFit gym, CrossFit Rising Star. Maybe he could help.

Goodhue went in for a meeting with the affiliate’s owner, Rob DiTursi.

“So, what does your day look like?” DiTursi asked.

“OK, so you have an eating disorder,” DiTursi replied.

“I don’t have an eating disorder; you’re crazy,” Goodhue insisted.

“Instantly, I don’t like this guy,” Goodhue recalled. He walked out and went back to the big-box gym, where he made half-hearted attempts at following fitness apps and got more sales pitches than cues from the trainers on staff.

“But after three months of no progress and looking in the mirror, (Goodhue knew) he was right.” “The potency of the CrossFit methodology is only fully expressed in the hands of a great coach.”

While lying in bed one morning in October, 2020, Goodhue had a change of heart.

“I had an epiphany,” he recalled. “I’m like, ‘Yeah, I’m gonna start CrossFit. It’s October. It’s a celebration of my emancipation from my first marriage. Let’s freakin’ do this.’”

He was intimidated at first.

“I walked in that gym and I was so, so nervous,” he said. “Then I realized there’s just a lot of other broken people like me that are trying to do the best they can.”

“There’s nothing wrong with you,” his coach replied. “You need to get rid of that sweat vest — and you need to start eating.”

DiTursi introduced Goodhue to the CrossFit nutrition recommendation — “eat meat and vegetables, nuts and seeds, some fruit, little starch, and no sugar. Keep intake to levels that will support exercise but not body fat” — and helped wean him from the scale by setting performance-based goals.

“Together, we changed one thing at a time, starting with nutrition, and gave each change a few weeks or more to perform before we made our assessments and adjustments and moved onto the next,” DiTursi said.

And when Goodhue’s proclivity to overtrain kicked in, DiTursi laid down the law.

“He’s like, ‘No. Empty bar; form first,’” Goodhue quoted his trainer. “He’s constantly coaching me. (The coaches) really guide you, and they really, really make sure that you stay with the CrossFit curriculum.”

Just as critical as what he’s been doing is who he’s been doing it with. A survivor of childhood trauma with an unhappy early adult life, Goodhue had never known what it was like to be part of a genuine community.

“I was just drifting,” he said, “and (then) I found CrossFit. And I’m like, ‘Wait a second. This is different — people are supportive here. They actually want you to be better. … A lot of places say ‘we’re a community,’ but they’re not. But I finally found a place that feels like that.”

“Whatever our group needs, we all help each other,” Goodhue said.

“It’s not an exercise program — it’s therapy,” he added.

“The community is what allows us to magnify and spread the results of CrossFit, to help more people access the potential for themselves. This community fosters connection and centers on service to others.”

Today, after two years at CrossFit Rising Star, Goodhue can do pull-ups and push-ups. He jumps to a 24-inch box and is working toward a muscle-up, and he maintains a body weight around 190 lb.

“It is more gratifying, in a sense, than ripping off your shirt and just looking good,” he said. “I can actually do things that other 48-year-olds can’t even imagine doing. Even some 30-year-olds.”

“It just comes from the combination of eating right (and) the constant variable exercise,” he said.

All in all, Goodhue’s life is a stark contrast from just a few years ago. He and Jori married in September of 2021, and the couple — plus two of Goodhue’s sons — enjoy working out together when they can.

Goodhue recently ran a 5K in the rain for the pure joy of it — and he no longer drinks or smokes.

“All that’s out of my life now,” he said. “It’s a whole philosophy, between the nutrition, getting your sleep … (and) having this community where you can exercise with a bunch of people and cheer everybody on and have fun. And that’s, I think, the magical thing about CrossFit. The magical piece of it is that you’ve just got everybody around you, and you just want to keep it going because it feels so good.”

“I don’t know where I would be without CrossFit right now.”